“Gospel-sharing starts right where you are, and it goes out from there. Evangelism isn’t reserved for far-away mission trips—evangelism should be a part of the Christian’s daily life,” says Tyler Detrick, pastor of Light of the Nations OPC in Dayton, Ohio. This convicting statement is not mere sentiment for Pastor Detrick but is strongly supported by his demonstrated passion for and work in the area of evangelism and missions. For years, Christ’s command in Matthew 28:19 to make disciples has drawn Detrick to be intentional about evangelism. His latest plan to encourage mission-mindedness in his congregation and presbytery? A full-blown youth evangelism conference.

Inspired by the notable and admired work of the Boardwalk Chapel in Wildwood, NJ, Pastor Detrick desired to see the endeavor of that regional mission outpost brought home. Bring it home, he did. After an extended period of planning and correspondence with Chris Byrd, Boardwalk Chapel evangelist, about how a local evangelism event might be conducted with the same goals in mind as the Chapel, plans for a local missions event finally came together. In August, twenty-seven youth gathered at Light of the Nations Church for a four-day evangelism training event. Youth from the congregations of Light of the Nations Church, Covenant OPC (Vandalia, OH), Redeemer OPC (Beavercreek, OH), and other churches within the Presbytery of Ohio, participated in service opportunities, training sessions, and public evangelism events during their time in Dayton.

Detrick’s intention for the conference was clearly expressed in his perspective on how this event harmonizes with other outreach efforts at Light of the Nations Church: “We don’t want pursue evangelism only in our other ministries [such as Quran/Bible discussions and ESL ministry] and give our youth the idea that evangelism must take place far away or be something completely different for them. It’s not. Evangelism is what we are doing each week when we are equipping people to witness to their family, friends, and strangers and we want to get our youth in on that.” Detrick’s desire was for youth to understand that evangelism can and should be done right where you are planted.

At the outset of the event, participants took part in preliminary training as well as one of two areas of service. The young ladies volunteered their time at a local pregnancy crisis center while the young men spent multiple hours weeding and landscaping an elderly woman’s yard in the neighborhood adjacent to the church. A providential and impromptu chance to share the gospel with a Muslim neighbor who stopped by to help lent itself to solidify the idea that there are opportunities for evangelism everywhere. This early segment of the schedule was intentionally designated for the purpose of serving. Pastor Detrick explains his reasoning, saying, “Our ministry of mercy and our ministry of evangelism must go hand in hand. We need to be the hands and feet of Christ if we are going to speak the words of Christ.” According to Detrick, this is one of the many benefits of evangelizing in proximity to your local church: service to those close by enables ongoing relationships and gospel opportunities with them. “Your witness and work go together,” Detrick says.

Following their service, the kids engaged in over eight hours of training over the course of the next three days. This training utilized the book Honest Evangelism by Rico Tice and consisted of four parts. First, Detrick discussed what the Bible teaches about evangelism, correcting wrong assumptions about what it is and why Christians do it while exploring various worldviews the students might encounter. This was followed by a time of group-wide honest reflection on why evangelism is difficult and what barriers, such as pride and fear of man, often stand in the way. The third portion of the training was an exploration of evangelistic tactics and elements, including teaching on how to articulate the gospel clearly, how to use tracts, and how to engage with nonbelievers by posing thought-provoking questions. Lastly, there was time for role play and practice before the youth went out to put what they had learned to the test.

Interspersed throughout the conference were public evangelism outings. The kids ‘took to the streets’, handing out surveys and tracts at a Dayton Dragon’s baseball game, a German festival, bus stops, local parks, and in Dayton’s Oregon District. Their goal was simple, yet not necessarily easy: meet people, talk with them, and attempt to broach the message of the gospel. This was aided and facilitated by a survey Detrick and the other chaperones had developed ahead of time, which encouraged the community to share what they believed about Jesus, sin, and the gospel. This proved to be an excellently effective method, which produced over 150 conversations between the young adults and strangers. Even the individuals who were not open to discussion often still walked away with the survey flier in their hand, which contained three verses explaining what the Bible declares about Jesus, sin, and the good news of the gospel.

In addition to the survey brochure, the group used a tract designed as a Dayton-themed postcard which included the gospel message on the back as well as information about Light of the Nations Church. With these tools in hand, the youth engaged with Daytonians from every walk of life. They encountered many catholic individuals and others who believed in a self-made religion, were critical of the authority of scripture, and whose language seemed religious yet did not profess faith in Christ. In such interactions the kids unwaveringly insisted on the necessity of salvation by grace through faith in Jesus Christ alone.

According to Detrick, the kids were surprisingly eager to speak with people, even asking to move to new locations when they weren’t seeing much foot traffic. In total, the 27 teens handed out 1,500 tracts. Pastor Detrick was encouraged by their readiness to approach passers-by and ability to field a wide array of questions. He further described how wonderful it was to overhear them recount conversations and interact with one another’s successes and difficulties, even during times during the week set aside for free time.

The youth concluded the week energized and zealous to pray for those with whom they had witnessed. In fact, many attending youth from other congregations asked their parents if they could attend Light of the Nations Church that following Lord’s Day, curious to see if any of the people they spoke with would come. “You don’t want to presume that the Lord will immediately bring in a ton of people as a result of your evangelism, but it is wonderful to be expectant. And these youth were expectant—they believed the Lord was doing things through their words,” Detrick says.

Though there was not a flood of curious nonbelievers at Light of the Nations Church the following Sunday, there were three attentive visitors at worship because of the evangelism event as well as six calls to Pastor Detrick later that week from individuals in the community who had ended up with one of the postcard tracts. As with any evangelistic endeavor, though it is impossible to see the full impact of such labors, there is great encouragement in the promise that the word of the Lord will not return to him empty.

Overall, Pastor Detrick was invigorated by the event and motivated to do something similar again in the coming years. What started as a desire to equip youth to be prepared to share their faith culminated in an immensely fruitful time of earnest growth and evangelism. Detrick shares his excitement by urging other churches to try something similar: “Any church could and should try it. You have to find the people who are in your community, assess the best ways to engage with them, and reach out to them. Everywhere is different, but that is a challenge for all churches.” A challenge that is worth laboring to overcome, Detrick believes. “We know Christ calls us to open our mouths and move our feet for the gospel. Why do we overlook the places where we are planted? An event like this is an organized reminder that we all should be striving to reach the people nearest to us with the gospel.” 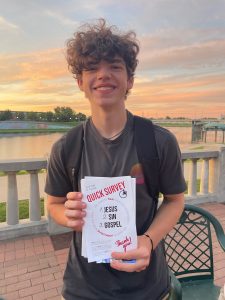 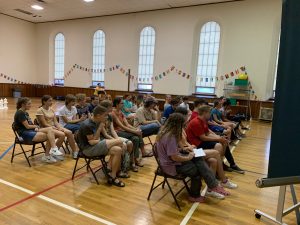 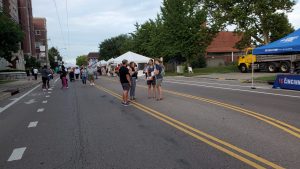 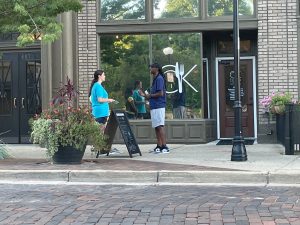