The Boardwalk Chapel: A Unique Experience

The Boardwalk Chapel: A Unique Experience

Home » Posts » Get Inspired » The Boardwalk Chapel: A Unique Experience 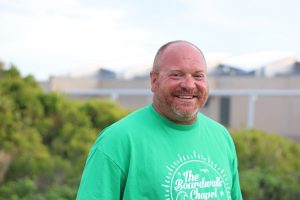 Dave shares his experience serving at the Chapel, including the opportunities he has had with the youth from his church and with teens on the boardwalk.

“The teaching at the Chapel is definitely Gospel-centered. It’s speaking the truth to others, and the need to speak it in love. Not argumentative, not from a place above them because we’re sinners just like they are. The boardwalk is another awesome experience for the rest of the teens. We’re put in situations we’re not put in at home. Half of them have never seen or heard [the gospel]. It’s a good experience. Very difficult, in a lot of ways. We talked to a lot of teenage groups which was a blessing and a curse. Some on the boardwalk responded in mockery—that was very difficult for our kids. But it was also something they need to realize because that is the world. We also had some great conversations with young men and women that were genuinely interested, and I don’t think that would have happened if our group wasn’t teenagers; peers."

"Last night we had a conversation with a whole group of teens. We eventually broke into three separate groups and I spoke to one young man for a long time. He came up and apologized for the behavior of his friends. He said, ‘I really want to know: what is repentance?’ He honestly wanted to know. He came one-on-one, after his friends had backed off. He and some others came back and actually said, ‘Really, what is the Gospel?’”