This is the second glowing report we've received on the RP Missions (RPCNA) team that served with missionaries Woody and Laurie Lauer at the Nozomi Center in Yamamoto, Japan, in the summer of 2019. RP Missions regularly sends teams to Japan, which OPC members are welcome to join! 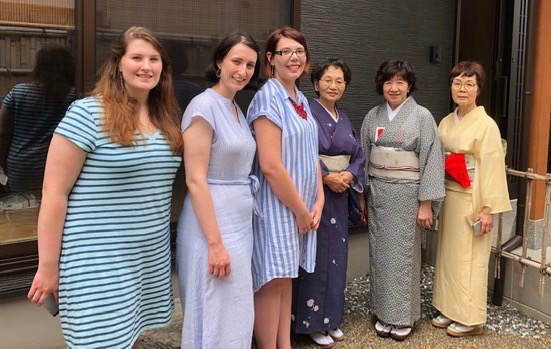 We continue to give thanks for the RPCNA (RP Missions short-term missions team) team:

Their schedule was non-stop 6 days a week. The team labored long hours in the fields and yards of elderly neighbors, and in preparing and distributing literature. Their concrete acts of love continue to help open doors and build friendships in the area. When visiting the town hall in September, the welfare department staff told us that residents whom we had served expressed their gratitude for help from Nozomi volunteers.  In addition to serving at all the regular Nozomi activities, they helped us host a memorial service, two  additional cafés with live music, a basketball workshop for kids, and English classes.

The last week in July, they organized our one day VBS, which attracted all non-Christian kids and moms, several of whom attend the Nozomi English program. The Bible school theme was God’s love as Creator and Savior. We are thrilled they came! The same week the team also helped to collate and distribute 3,000 Nozomi calendars and a gospel tract, “Two Ways to Live: The Choice We All Face,” to homes all over Yamamoto. Pray for the continued work of the Holy Spirit for all who read the gospel tract. One woman, Mrs. H., came the next day after reading it to ask about the Bible. Since then, she has returned to visit several times and attended activities. Woody explained the meaning of Christ’s death on the cross to her two days ago; she cried. Pray that God would grant saving faith and repentance to Mrs. H. as she learns more about the Bible.

August 1st, the RP team said goodbye and left to help at a three-day camp for elementary and junior high kids sponsored by Presbyterian Church of Japan (PCJ) churches. Three pastors there were Woody’s former seminary students. The team also worshiped at a PCJ church near Yokohama where Woody was invited to preach. From there, Woody travelled with them to Tahara City to work with the Brazilian church for a day, where Brazilian missionary Daniel Gomes labors. Finally, the team departed to serve with the RPCNA churches in the Kobe area for several weeks. We praise God for their faithful labors and pray for continuing fruit.