Ministry Team 2019: No Shortage of Things to Praise Him For

Ministry Team 2019: No Shortage of Things to Praise Him For

Home » Posts » 2019 STM Photos/Reports/Testimonials » Ministry Team 2019: No Shortage of Things to Praise Him For

Craig was a member of the Ministry Team that served during "Week Four" at the Boardwalk Chapel in Wildwood, NJ, in July 2019. The team was organized by Covenant OPC (Orland Park, IL) and had 24 members from California, Illinois, Indiana, and Wisconsin. 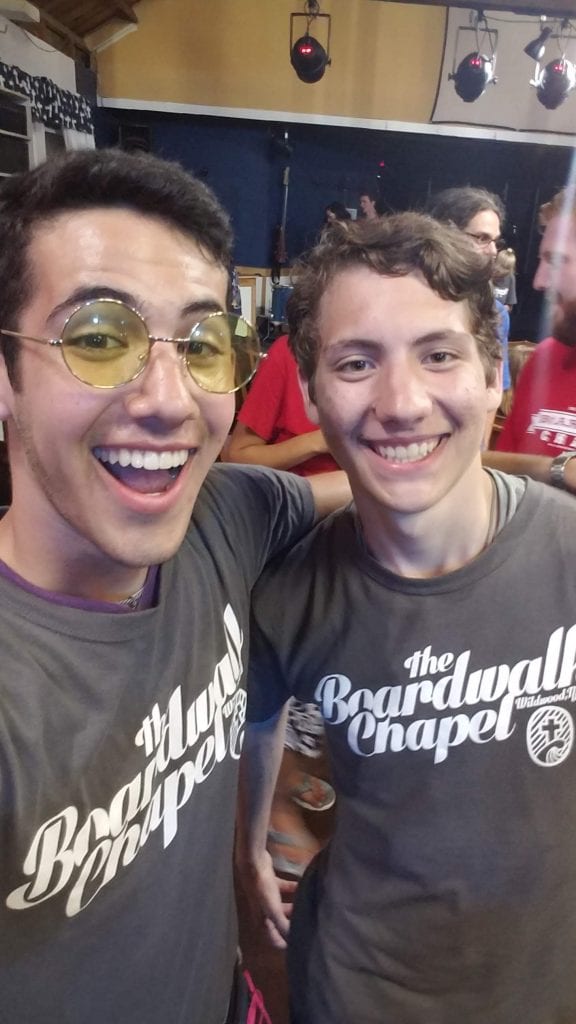 Craig (right) with his brother David, who has served on this team before!

This was my first time to go to the Boardwalk Chapel. I was among many who have been going for multiple years, and it was also only my second taste of short-term missions, so I felt a bit intimidated at the prospect of traveling far from my home in Illinois to talk to strangers and pray with people I'd never met.

But the Chapel staff were very lively and easy to engage with, and it wasn't long before I found myself involved in all the activities there. Most days were comprised of a general devotional and then small group studies in the morning; evangelism training in the afternoon; practice for our songs and skits after that; then the evening program (which included the things we'd practiced) around 8:00 PM. After the program, we separated into groups of four for evangelism and prayer, and after that we would all gather together and select four people to close us in prayer, then retire.

I was nervous at first when going out onto the Boardwalk to evangelize, because I felt that I might not know what to say. But when we actually got out there and started talking with people, I felt energized, and I could almost feel the light of the Gospel shining as we walked. Whenever we came back afterwards, I was inspired, and felt as though I could walk up to anyone and present them with the good news of Jesus Christ. Although many of the people we tried to engage rejected us, some did stay and listen. At one point, we were also approached by two fellow believers who saw us handing out Gospel tracts, which was an encouragement to us.

I would say that the biggest thing I learned during that week, however, was the value and power of prayer. I have been afraid in the past of public praying, because there was always the idea that I had to say the right things to a circle of people listening intently. But now I know that it's not that I have to "say the right thing," certainly not to people. It's bringing our praise, confessions, and requests to God. We're speaking with the Lord, not with each other. Discovering this, through the grace of God, helped me appreciate His answers to requests throughout the prayer-intensive week.

One memorable example was one night when we were out evangelizing and we had been so far unable to have a conversation with anyone, and we were heading back to the chapel, since it was getting late. As we walked, the leader of our little group began praying that we would have a good conversation with someone before we turned in. Not a few moments later, we began speaking with a man who was a Muslim. We gave him the Gospel, and started discussing how it is that Christ paid for our sins so that we don't have to, since that was something he took issue with. It turned into a full conversation that went on for so long that we eventually had to leave and let our leader finish it, since it was time for us to go in. I later discovered that he was familiar with the Boardwalk Chapel, and had been to one of the Chapel's "Midnight Dinners" for international boardwalk workers before (something he did again this year). It's always interesting and amazing to see how God works these things, and how it is all for His glory and our good. I pray that seeds were planted within that man, and all the people that our teams spoke to; that the Lord would sprout them in His good time.

Another smaller example of God's faithfulness through prayer was on Thursday night. That was the Chapel staff's day off, so our Ministry Team had to run the program. I myself was in three separate skits that night, and I felt very nervous about performing. It was before one skit that I was particularly worried about that I came to the Lord in prayer, and asked him to calm me, and to help me remember my lines. Then we went onstage, and I performed everything just fine. I remember walking down after it was over, and feeling waves of relief and thankfulness wash over me. Even though it was something much smaller, it still displays God's willingness to listen to His people, and grant their requests. Despite our continual sin and rebellion, He still provides for us, and He still cares for us. That alone is worth eternal praise from us to our God.

So when the week was over, and we all drove back home, I was left with the need to praise the Lord, and to proclaim His Word. Following the example of one of the staff members, I pray that this feeling would go beyond just being a "spiritual high," not just for me, but for all who served at the Boardwalk Chapel, for all who do missions trips, and even for all who don't have particular cause to praise God; that we all still would, because there is no shortage of things to praise Him for; and that we would all go forth as shining lights of His Word, through the Holy Spirit, and live every moment for His glory.