He is There to Help, Comfort, and Shield

He is There to Help, Comfort, and Shield

Home » Posts » National STMs » Menominee Missions » He is There to Help, Comfort, and Shield 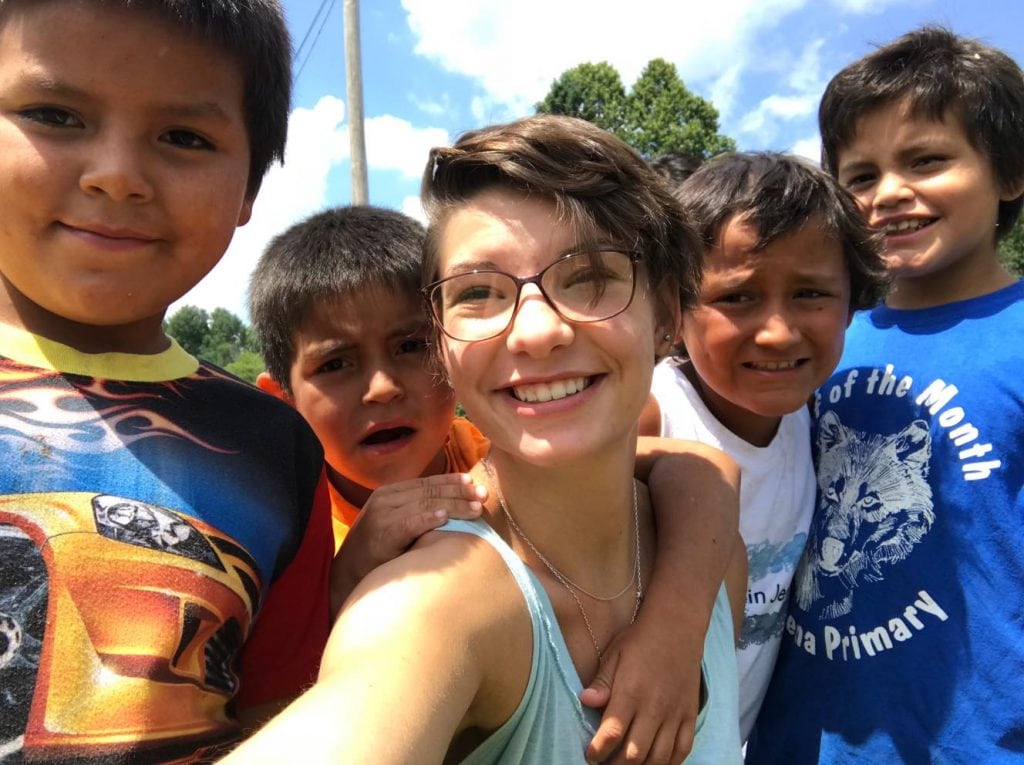 Lydia with kids at Menominee Missions

This year, Menominee Missions (formerly known as "Venture Missions") was a very different kind of learning experience than it has been in the past. Reason being, I think this year my eyes were particularly opened to the difficulties of short term missions.

Our team was much smaller than usual. I thank God for the ones who were there, and give so much thanks to Him who used us to the best of our abilities. But, while we did indeed manage, it was a markedly more difficult year. Due to the smaller team, we were simply spread out a bit too thin, especially the leaders of the VBS groups.

Therefore, there was a bit more stress on everyone throughout the week; being spread too thin is a tiring state to be in. With kids running around, not listening, not wanting to hear what you so desperately want them to know and believe, I have to admit, I was becoming very discouraged. The kids tended to get rowdier as the week went on. But God, in His grace and mercy, gave us that special service for the kids on Sunday afternoon. After all the park time, after all the VBS events, this was just a short service on Sunday to wrap everything up. We picked the kids up and brought them to the church. Then, we all worshiped together. They sat still, and they listened. They interacted and they sang. They were quieted this one time, and I think I could physically feel my heart grow.

Almost every time I witness to someone, whether at the Menominee Indian Reservation or in my normal life, I remember the very, very first time I was at the reservation. It was the first night, I was 14, and I was so scared about not being able to witness correctly, effectively, rightly. I was afraid that the trip would be for naught if we weren't able to see a ton of people come to Christ in those few short days. Well, team member Josh Bootsma said something that I will never forget: "Guys, remember - and I have to remind myself of this a lot too - but be comforted in this; you aren't the ones saving these kids. It's not up to us. We are here to plant the seeds." I just about felt the weight of the world lifted off my shoulders in that moment.

After coming home this year, I realized that I had let that reminder slip from the front of my mind. There are so many things you can get hung up on in short-term missions. Even the simple logistics of how things should work can become huge setbacks or stumbling blocks. When you throw into the mix the events that don't go as hoped for or as perfectly as you wanted, hearts that you can't immediately see changed in front of you - as silly as it seems, when you're there, as the week goes on, it can be hard to not see the fruit of your actions unfold in front of you. Thankfully, God Himself works through His imperfect servants - He doesn't get stuck on anything, and He never will. That's why it has to be Him. He has to do the saving - anyone who has ever been on any mission trip, or has even witnessed to someone, knows that we would just mess it up. Thank the Lord that it's not up to us and our own efforts.

Long story short, to break this down into takeaways: don't get hung up on the little things. Even if they don't seem little at the time, take a breath and work through it. God will not give us anything that is more than we can bear. And, even more important, remember the grace of God. He gives it so abundantly, and, especially when we become discouraged, He is there to help, comfort, and shield. Others' salvation is not up to us, but He can help us plant His seeds.