From the February 2018 issue of New Horizons

Have you considered serving on a short-term mission trip but were unsure how to get involved? Perhaps you want your children to gain the experience but no one in your congregation is going. Perhaps your church is too small to organize and fund a trip. Should you join a presbytery-sponsored trip?

When OP pastor Joe Keller was in college, he and his late wife, Jean, each served on short-term mission trips to Kenya and Australia respectively. He fondly recalls how they gained new perspectives on the world and broadened their interest in missions. Later, they hoped their six children would have similar opportunities. So far, their daughter Hannah has served the OP mission in Uganda three times and Rebekah and Ruth once. Catching the bug for missions, Naomi and Ruth also served on non-OP mission teams.

Those trips were far more than sightseeing. Keller, pastor of Christ Covenant OPC in Dallas, Texas, encourages his congregation’s young people to go on short-term mission trips as a way to appreciate their blessings, increase their awareness and care for others’ needs, and learn many ways to spread the gospel. “Short-term missions challenge the young person’s level of faith and service,” he said. “This has the potential to greatly deepen their faith. Missions and serving are contagious.”

To learn what opportunities are available, Keller has contacted the OPC offices and the missionaries directly, then promoted those trips to his fifty-member congregation. He and his members also have joined OP Pastor Steve Igo’s large teams from Cedar Presbyterian Church in Hudsonville, Michigan, and some other churches, on their hurricane and tornado relief trips to Missouri, Oklahoma, and along the Gulf Coast.

Although Keller’s church is small, the session designates specific diaconal offerings to support an individual’s mission trip, and the congregation generously gives.

James La Belle, pastor of the OPC of Cape Cod, Massachusetts, and his wife, Chantry, also want their seven children to serve the church through short-term missions. Both grew spiritually during their ten months in Africa. “Now it was time for our children to make the most of the OPC opportunities to serve,” said Chantry. “It blessed our children to know that they were helping to spread the gospel to children who were unchurched or young in their faith. They saw some fruit while they were there, even though it was difficult at times.”

Four La Belle children have served on OPC trips, starting with River and Schylie at the Quebec City English for Kids Camp. Car washes and diaconal aid helped to fund a disaster relief trip in Houston. Their session added a line item in the church budget for Schylie’s current yearlong service in Uganda.

“It is a benefit for our children to meet other people in the OPC and serve alongside them,” said Chantry. “It is great for them to see those who are not churched and grow in compassion for the lost. It reminds us that the call of Christ to be a light to the world reaches beyond the local church and its needs.”

This summer, the La Belle children hope to join an English for Kids Camp in St. Georges de Beauce, Quebec. Covenant OPC in Barre, Vermont, organizes the trip, directed by team leader Olivia Durham, wife of Pastor Carl Durham. Their team of twenty includes many from other OP churches in the Presbytery of New York and New England. Working with a presbytery, which provided about a quarter of the cost annually for transportation, food, and camp supplies, has helped the seventy-five-member congregation continue this service for fifteen years. Team members pay $200 a week, and each volunteer works with his or her session to plan how to raise the funds.

“One of our goals is to include teens from churches in our presbytery who do not have youth groups, ” said Durham. “We are setting up a little ‘world’ for a week where God reigns and people work together for his glory, harmoniously. The culture of the camp, working together on one job rather than for individual goals, is a precious opportunity, a real honor and joy.”

Rather than individual churches sponsoring trips, presbyteries often step in. The Presbytery of Southern California organized their first short-term mission trip in 1987 to support their own missionary to Mexico. After that work closed, the PSC Youth Committee asked OP missionaries if they wanted teams sent to their fields. The Czech Republic received their first overseas team—Team Praha—in 2007. In 2008, Haiti missionary Ben Hopp also hosted the first of many teams.

The PSC Youth Committee names team coordinators, then team leaders, such as a pastor and wife or a seminarian. They recruit vets and rookies through information sent to churches and the OPC’s online S.T.O.R.M. report, published by Short-Term Missions Coordinator David Nakhla. A team member’s church helps to raise funds.

“Sessions who give the congregation an opportunity to support a young person on the team have, in almost all cases, provided the necessary funds,” said former Team Praha Coordinator David Winslow. “Having the presbytery send the teams and share the blessing of doing so around the regional church shares the expense of sending team members more broadly.”

Smaller groups are asked to join presbytery teams. “The presbytery level seems the best place to work,” said Hopp. “It allows a greater number of OPC churches to make a connection with the mission here in Haiti.”

A Spot for Training

The Boardwalk Chapel in Wildwood, New Jersey, offers intensive apologetics and evangelism training with hands-on experience. Volunteer staff promote the message of the gospel by specializing in music, drama, or support work. Weekly church teams are integrated into the daily training and evening programs.

“Ideally, volunteers are fully supported by their churches, as we try to emphasize that each short-term missionary is being sent by their home church to assist with the ministry here,” said Elizabeth Horst, the Chapel’s administrative assistant. Others raise their support through friends, families, or out of pocket. 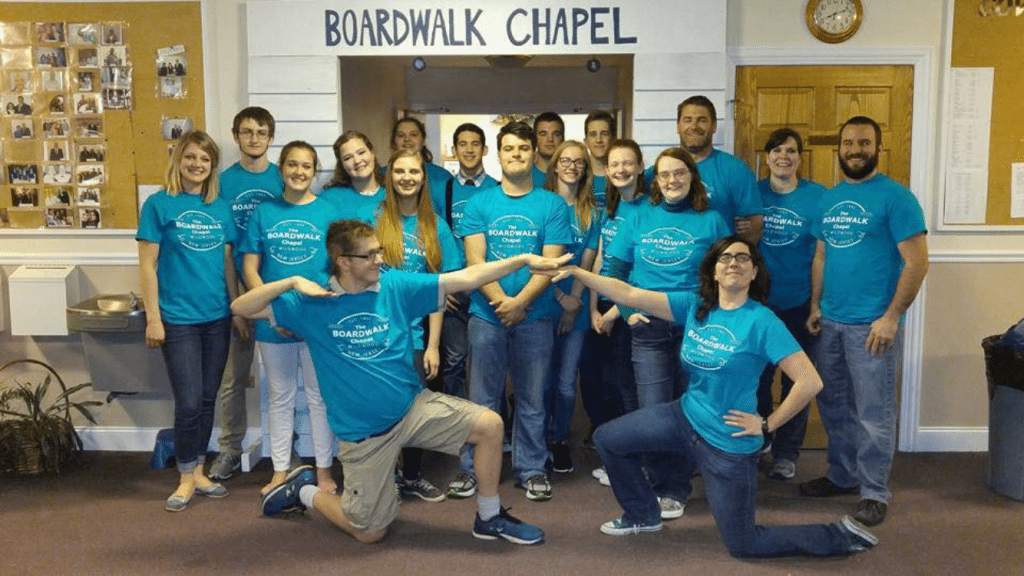 The youth group from Covenant OPC in Orland Park, IL, replicating the Chapel's atmosphere for a fundraising dinner