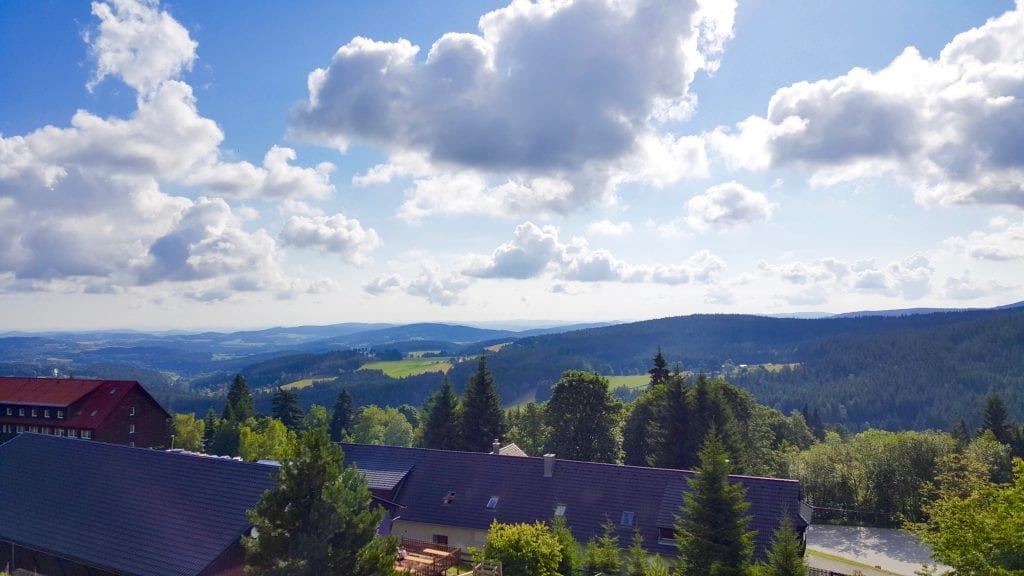 English Camp is held in the Sumava Mountains

If you prayerfully decide that you want to participate in the Bayview English Camp ministry and are within driving distance, you will be expected to attend two planning meetings on the Bayview site in Chula Vista. When the time comes, you may travel to the Czech Republic from the airport nearest you rather than from San Diego, but your flight arrangements must be cleared with the team leader before they are confirmed. You will be expected to pay for your own airline ticket and hotel room during the two-day orientation in Prague as well as for meals. You will need to pay for your camp expenses which will include room and board. And you will be expected to remain in Prague for the weekend after the camp for an evaluation meeting and Sunday worship. You may find family, friends, or your session willing to participate in funding your trip, but it is your responsibility to come up with the money. The team as a whole does no fundraising. Costs vary year-to-year as the value of the dollar fluctuates, and of course your airline fees will vary according to your city of departure; but basically you should set aside about $2500-3000 for the trip (primarily for flight costs).

The first planning meeting will be held in January. After that things move very quickly. The trip will actually take place July 10-22, 2019. Many of you will want to extend your trip to see more of Europe, and that is of course fine, but we request that your touring take place after the English Camp rather than before. There are two reasons for this: First, you will be expected to bring a bag of supplies for the camp with your luggage, and second, you need to arrive at camp rested and ready to work hard. Our experience has shown that team members who arrive for camp after having already traveled for a week or two are ready for a rest, not another challenge! So plan your additional travel for after the camp!

You will fly into Prague no later than Wednesday afternoon, July 10, where you will be met and escorted to Zbraslav, the town where the Farniks live. In order to coordinate pickup times, as mentioned above, your flight arrangements should be confirmed with the team leader. You will spend two days in Zbraslav getting over your jet-lag, helping to finalize camp arrangements, packing up supplies, and attending orientation meetings. We will travel to the camp site on Friday, where we will spend several hours decorating and preparing for the campers’ arrival on Saturday morning. Camp is officially over for the Czechs the following Saturday. But upon our return to Zbraslav we will help the Farniks unpack the gear and attend one more meeting – this time to evaluate the camp experience and make suggestions for the next year.

You will also be expected to stay over Sunday because Czechs from the Prague area are invited during the week of camp to visit a worship service on Sunday morning, July 21, at the church-plant in Modrany (near the Farniks’ home). The team also joins in that service, and we usually have the opportunity to see a few of the campers again, and encourage them to continue to worship with the Farniks in Prague. The Sunday service ends the period of camp-related activity, and you are on your own to explore more of the city, travel elsewhere, and return home. However, Sunday evening dinner will be served by the Farniks and a recorded sermon played in lieu of a Sunday evening service; you will be invited to attend.

Now is the time that you need to begin to prayerfully consider your role in this wonderful opportunity for ministry. If you want to join our team or have questions that have not been answered by this letter, please email Sherry or Kathleen, below.