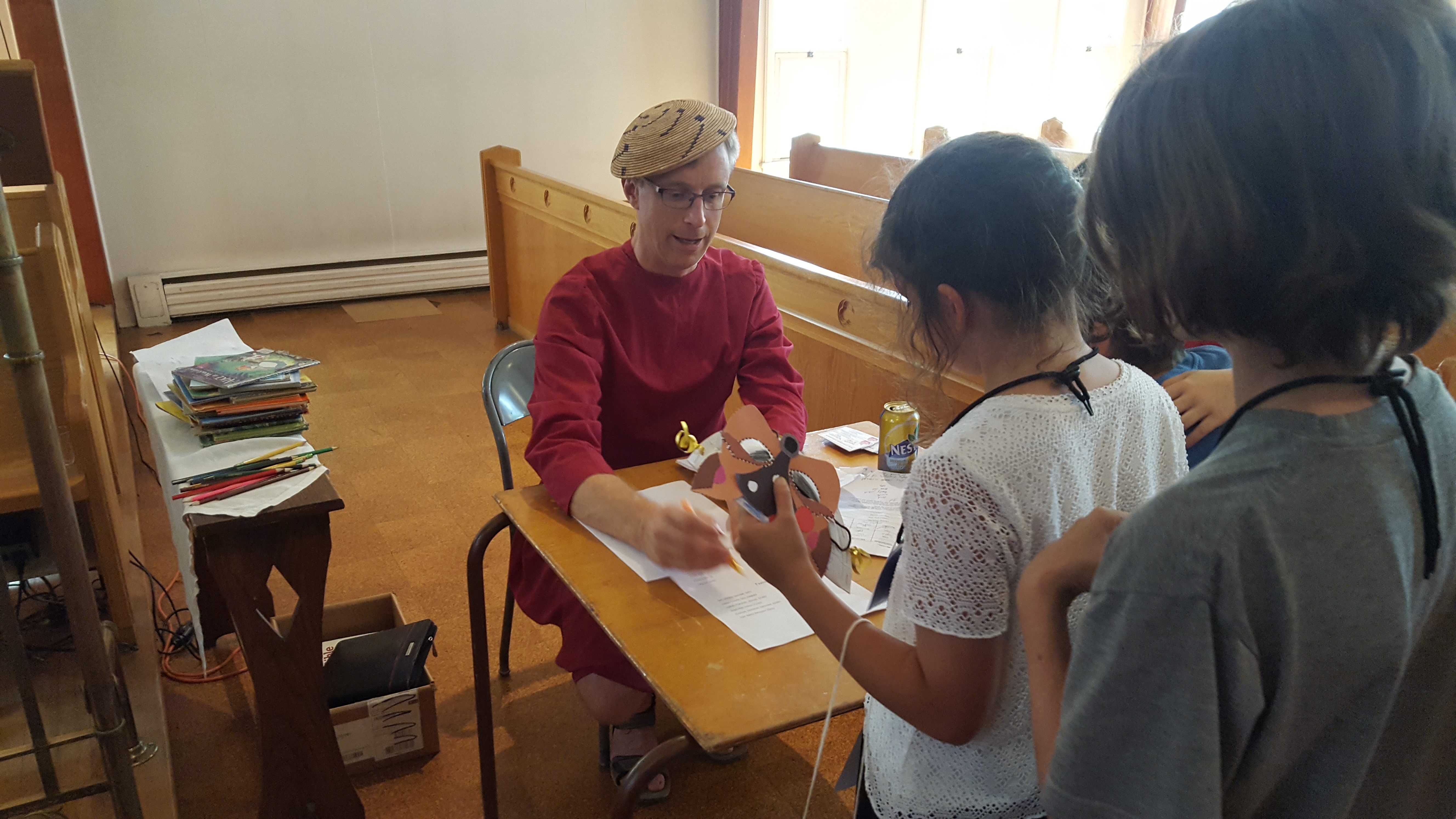 I snapped a photo of Pastor Bernard Westerveld on the last day of "English for Kids." He wears a costume designed to remind the children of a teacher or medieval professor. In order to earn a coupon for free ice cream, the kids must be tested by Pastor Bernard. For the younger children, he would ask basic questions from the curriculum. For others, he might ask them to read a children’s book and then explain it to him in English. For the kids in "English Challenge," he made them do things like write a 50-100 word story about their family, or write a four line poem.

On July 1st, 2017, I along with two others, left my home at 4:15 AM for the long drive to Quebec City to participate in Week Two of "English for Kids" Bible Camp. We were recruited to help round out a team from an OP church from North Carolina. Crossing into Canada on that day was extra special as it marked the 150th anniversary of that nation’s founding.  While patriotism ran high in Ontario, the holiday was a little more subdued in French-speaking Quebec.  We arrived safe and sound after a long day of driving.

I was honored to teach the "English Challenge" class for kids who are more advanced in their English- speaking abilities. My class included children from traditional Quebecois homes as well as children whose families hailed from places as far away as Haiti, Madagascar, Albania, Tanzania, Burundi, and China.

"English For Kids" has three goals (in this order): Fun, speaking English, and learning the Bible.  In my class, we tried to combine all three elements by following the curriculum and trying new things. For instance, I invented a game to help kids learn the basic concepts of baseball while also working on their English vocabulary.  On another day, I introduced a reading game that helped students understand the concepts of cause and effect. At other times, we simply turned to the Bible and read important passages, pausing to explain the meaning of important words and concepts. These classroom times were supplemented by other activities that are part of the "English for Kids" program – recreation, crafts, and music.

During the week, Pastor Bernard Westerveld reminded our team that in Quebec, conversions may be years in coming. As I provided devotions for our team each morning, I tried to remind everyone of this fact. One morning I taught from Matthew 13 and the parable of the sower.  I emphasized that our efforts during "English for Kids" involved sowing the seeds of the Gospel into young lives and that we cannot control whether those seeds will grow to maturity. I also had the team turn to I Corinthians 3:5-7 to remind them that if we happened to see fruit, then we should be quick to give God credit because “He gives the growth.”

In August 2016, I had the pleasure of helping with the "English for Teens" Bible Camping Trip. A highlight of this year’s trip was being reunited with seven of those students. It was nice to greet each one by name, inquire about their well-being, and offer encouragement to them. Some are clearly believers while others are still in process as they weigh the claims of Christ. Some in this latter group have participated in "English for Kids" and "English for Teens" for several years. Join me in praying that God will cause the seeds of the Gospel to grow to maturity in the lives of these teenagers as well in the lives of the children who participated in "English for Kids" 2017.