Bringing the Nations to Himself: The Power of Prayer at the Boardwalk Chapel

Bringing the Nations to Himself: The Power of Prayer at the Boardwalk Chapel 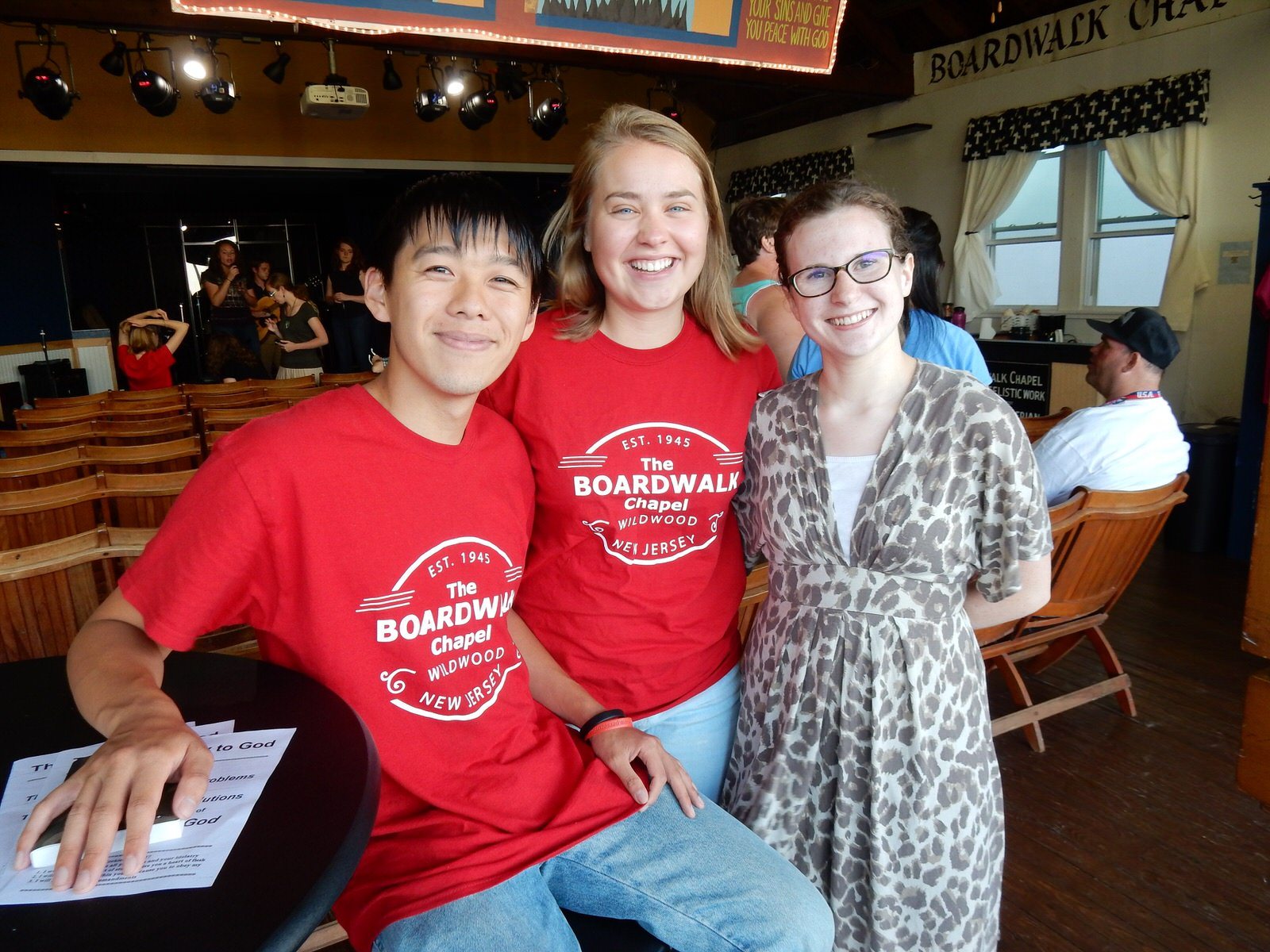 Timothy Hsu (with a couple of co-staffers, above) served as the Assistant Evangelism Coordinator at the Boardwalk Chapel in Wildwood, New Jersey, during the summer of 2016.  The following testimonial appeared on the Chapel's Facebook page and in their December 2016 newsletter.

More than anything else, this summer at the Chapel was characterized by one word: prayer. We prayed more intentionally, regularly, spontaneously, and fervently than we did last summer or at any other time or place I have ever seen. Whether in small groups or all together, planned or spur-of-the-moment, for 30 seconds or 45 minutes at a time, during or after evangelistic conversations, for unbelievers or brothers and sisters in Christ, again and again, we prayed. My greatest prayer going into the summer was that, as Jesus said of the temple in Matthew 21:13, the Chapel staff would become a house of prayer – and I stand in awe rejoicing at how truly and abundantly the Lord answered that prayer this summer.

The beauty of this summer was not only that we prayed mightily – time and again, we saw the Lord mightily and graciously answer us. It was evident from the very first night we went evangelizing on the boardwalk: With nearly 27 people on staff, we simply could not send everybody out to evangelize all at once, so we kept back about 8-10 people to stay in prayer while the rest went out with the Gospel – and that very first night, someone prayed to receive Christ. Within a month, sixteen people had called on the name of the Lord to be saved (for context, over the entirety of last summer, we saw twelve people receive Christ); and by the end of the summer, the total number was fifty-four. Our hands were more than full trying to set up the vacationers with churches back in their hometowns and disciple the ones living locally or working in Wildwood for the summer! (One local girl, Sarah Jo, became a dear friend of the Chapel and visited often after giving her life to Jesus.) I cannot believe it is a coincidence that we cried out to the Lord to work more than ever before, and saw the harvest grow so beautifully abundant before our eyes.

One of the most exciting and fruitful ways we saw God at work this summer was through the friendships we built with our neighbors working on the boardwalk, some local to the Jersey/Philly area but mostly internationals in Wildwood for summer jobs. Last summer, we made some efforts to connect and had some limited success; this summer, the Lord threw the floodgates open: We befriended Muslims from Egypt, Turkey, Kazakhstan, and Bangladesh, and Jewish people from Israel; we encountered atheists, Catholics, and Eastern Orthodox believers from Canada, Ecuador, Russia, Croatia, Romania, Albania, Bulgaria, Czech Republic, and other eastern European countries; we encouraged and were encouraged by brothers and sisters in Christ from China, Burma, Indonesia, Ghana, Honduras, and the Dominican Republic. The Lord has long brought the nations to Wildwood each year, but I am truly amazed at the friendships He allowed us to forge among so many of them this summer.

One of the key ways God opened the door for these friendships to grow was brand new this summer: In mid-June, we began inviting our boardwalk neighbors to a dinner at the Chapel, hosting it at midnight so they could come despite the crazy hours they often worked. These “midnight dinners” soon became a weekly fixture of the Chapel, eventually bringing in as many as 30 people some nights. We ate, talked, and laughed with these new friends late into the night, sometimes simply chatting about life on the boardwalk or trading cross-cultural knowledge, sometimes delving deeply into spiritual conversations and sharing the Gospel. I talked one night for nearly an hour with a Russian Orthodox girl and an Egyptian Muslim, Julia and Karim, who were coworkers and friends; they heard the Gospel, asked insightful questions, and even took English tracts and New Testaments in Russian and Arabic! (We gave out a lot of foreign language Bibles this summer.) My best friendships over the summer were with a young French Canadian man named Medrick (Catholic) and a Russian Orthodox fellow named Sasha; they both told me they felt one step closer to Christianity at the end of the summer, and I’m trying to stay in touch with them via Facebook and keep them in my prayers.

Perhaps the sweetest gift from our “international ministry” came in mid-July, when one of our Muslim friends from Egypt (call him Maahi) began asking more and more questions about Christianity and accepted a Gospel of Luke in Arabic – and shortly after, in answer to so many of our prayers, gave his life to Christ! We praised God so mightily for that… converting from Islam to Christianity is very difficult, even in America, and we saw his faith both grow and struggle in the testing of the weeks that followed. I sadly have not heard how he is doing in a long while, and I know that his life certainly could be in danger if he is back home in Egypt (hence the pseudonym); please keep him in your prayers.

One more memorial stone from this summer: As the new assistant evangelism coordinator, I helped to lead the evangelism team and keep much of the Chapel ministry operating. One primary way I helped was training the youth groups that came to stay with us each week to take part in the ministry. It was a joy to see them grow in their excitement for the Lord and the Gospel – and this summer, especially in prayer. We invited the youth into the culture of prayer that had blossomed so beautifully in our midst. Some of the youth group leaders told us at the end of the week that they had never seen their kids pray this way before. I was struck by hearing the prayers of some of these youth at the end of their time at the Chapel as they thanked God for the ways they’d felt His presence at the Chapel, prayed for courage to share the Gospel with their unsaved friends back home, and asked Him to help them keep the fire alive once they left the Chapel. The Lord did a wonderful work in the hearts of so many young people at the Chapel this summer, and I am confident that He will faithfully bring it to a full and glorious completion.

And now I leave you with one final plea: do not stop praying. When you think of it, pray for Sarah Jo, Maahi, and all those who gave their lives to Christ, that they would grow deep roots and bear much fruit for His glory. Pray for our international friends – Julia, Karim, Medrick, Sasha, and many others – that the Lord would faithfully provide others to water the seeds we planted and keep bringing the nations to Himself. Pray for the youth groupers who joined in our ministry, that their faith would blaze brightly in unceasing prayer and an unquenchable zeal to see the Kingdom of God push back the darkness. And most of all, I would challenge you – even as I challenge myself –  to pray for yourself: that the Lord would set your heart aflame for His Kingdom to invade this earth; that He would grant you wisdom, courage, and ever-growing zeal to share the Gospel with those who need it so desperately and be His ambassador to a dying world; that He would build up your church, your family, and your own life as a house of prayer for all nations, filled with the power of His Spirit and made alive by an ever-deepening love for Him.