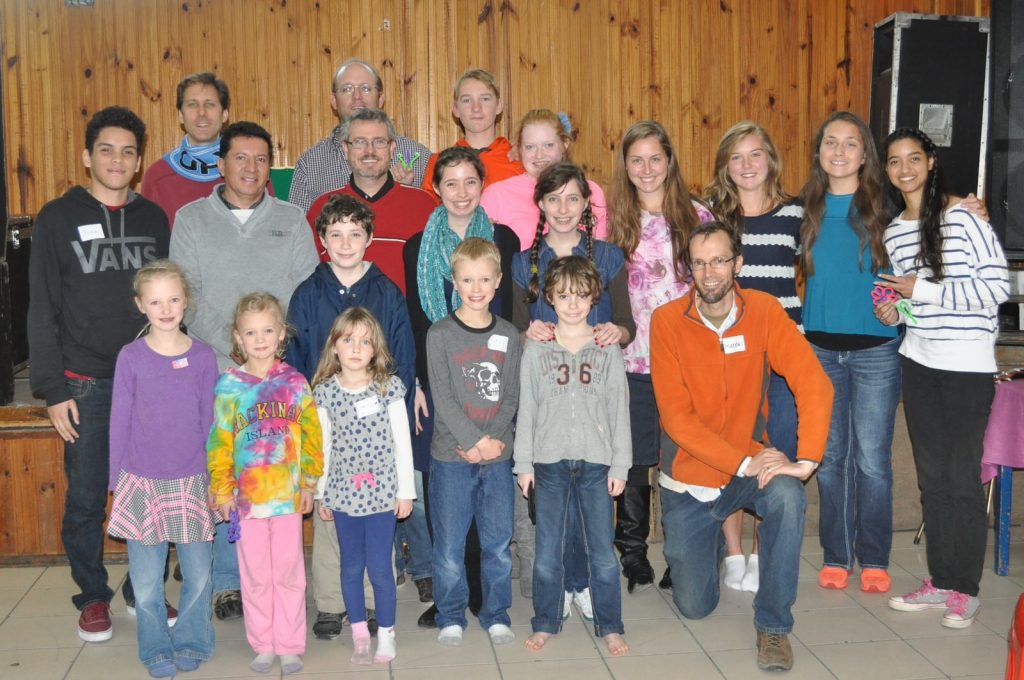 Rev. Markus Jeromin, who is currently serving with the OP Mission in Uruguay, led a Winter Outreach (their seasons are the opposite of ours!) at the new OP church plant in La Blanqueada, Uruguay, July 5-7, 2016, followed by a few days of questionnaire evangelism.

Markus Jeromin and Ray Call shared the following reports with us:

Thank you for your prayers for our new church plant's first VBS outreach! This winter's outreach was a great learning experience for us and also provided a great time of fellowship and encouragement. A team of 9 North Americans, 7 from a single congregation in the central US, one from Texas, and one from Ontario, traveled to Uruguay to join us for this outreach project. 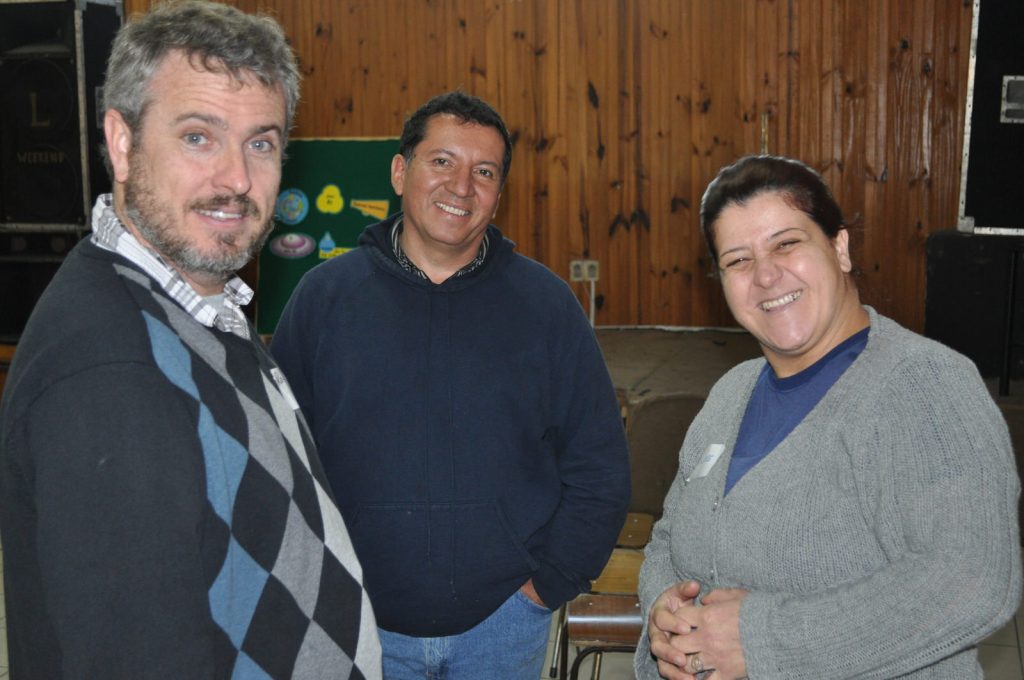 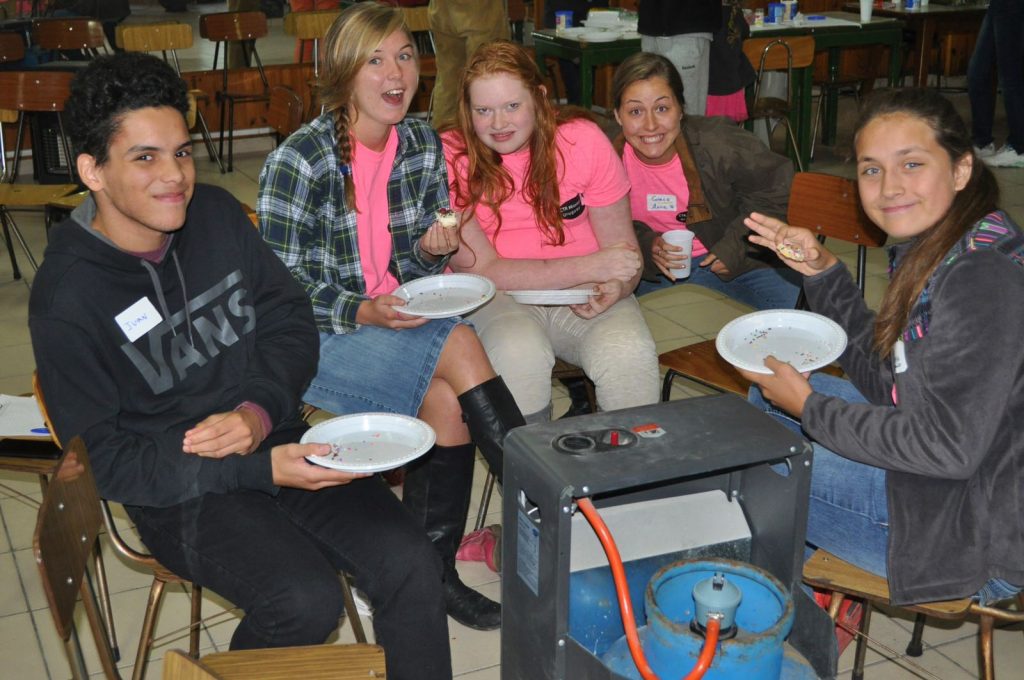 In the days leading up to the VBS, we distributed 3,000 fliers to homes near the church, as well as a handful of schools. Bad weather, it is said, keeps Uruguayans indoors, and we found this to be true as in God's perfect providence the weather was nasty on the first day, poor on the second, and sunny but cold on the third. One Uruguayan boy and his mother showed up for the first day but they left early and abruptly with no explanation. So it was primarily the children of the two missionary families that were ministered to ... and all had lots of fun. The visiting team got to experience Uruguayan life and culture close-up, riding buses and taxis, spending a half-day touring the local sites, and enjoying the Uruguayan cuisine. 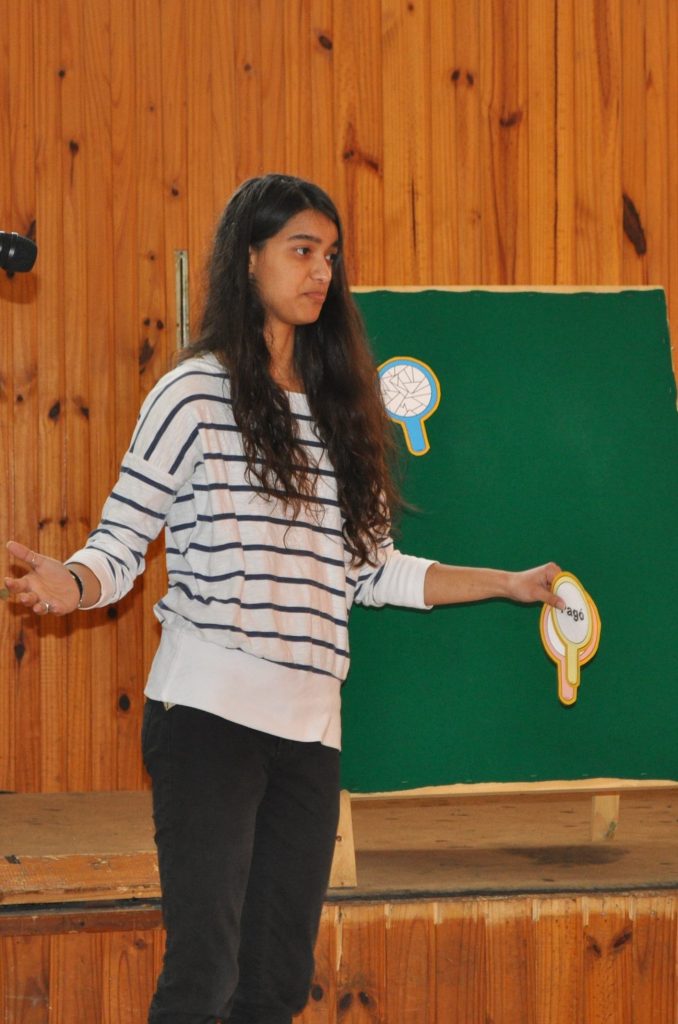 Brazilian Bruna Dourado has been a very regular attender and helper and encourager at the church, and served as a teacher at the VBS

Despite the low turn-out, God kept us encouraged. The young man from the inflatables company (supervising the bounce house and trampoline we had rented), was with us the entire time and asked a lot of questions and learned more about the gospel. One of Markus' conversational English students came for the last hour of the final day and stayed for the closing party afterward (complete with English country dancing). He much enjoyed practicing his English and meeting a bunch of "very kind" people. And for icing on the cake, the Lord sent a visitor to our worship service the following Sunday. He has no young children but was intrigued, having spotted a wet flyer on the sidewalk and taken it home.

Two of our bilingual North American helpers were able to stay past the end of the 3-day VBS and were a tremendous help, both to the missionary families and to our outreach efforts. Close to a dozen gospel presentations were made during a Saturday afternoon blitz of questionnaire evangelism at a large local park, and they were able to meet and witness to many of Markus and Sharon's neighborhood friends and shopkeepers. 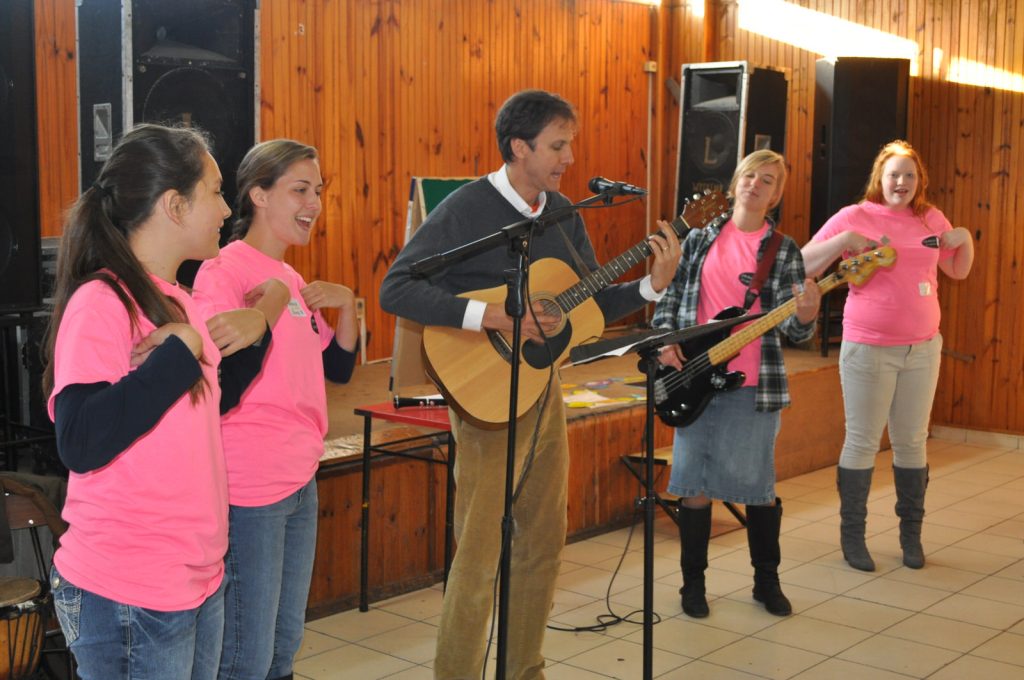 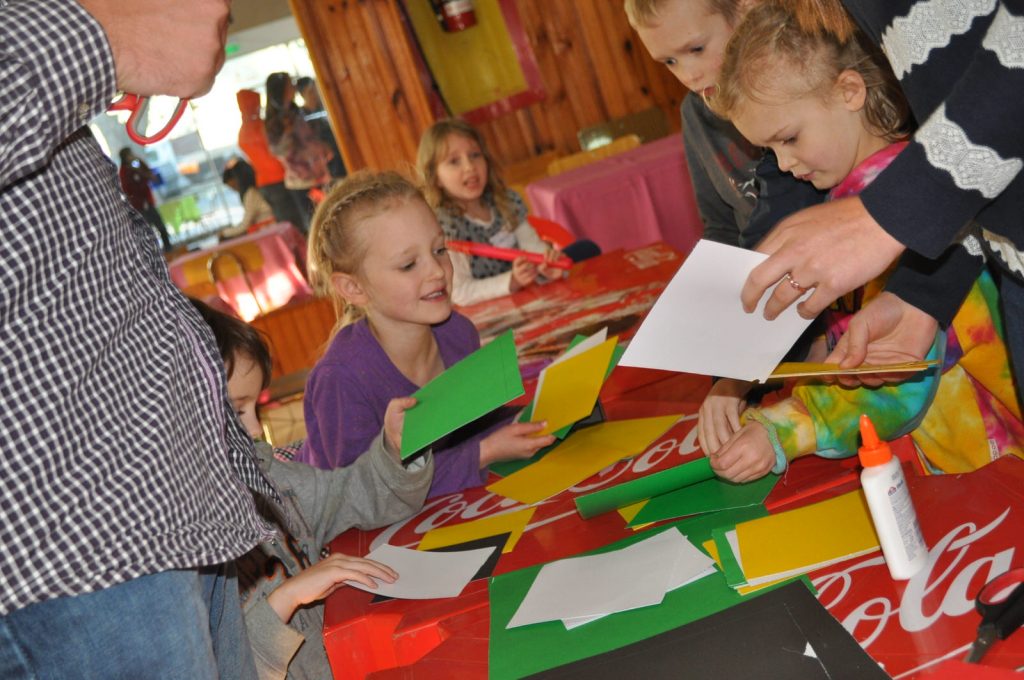 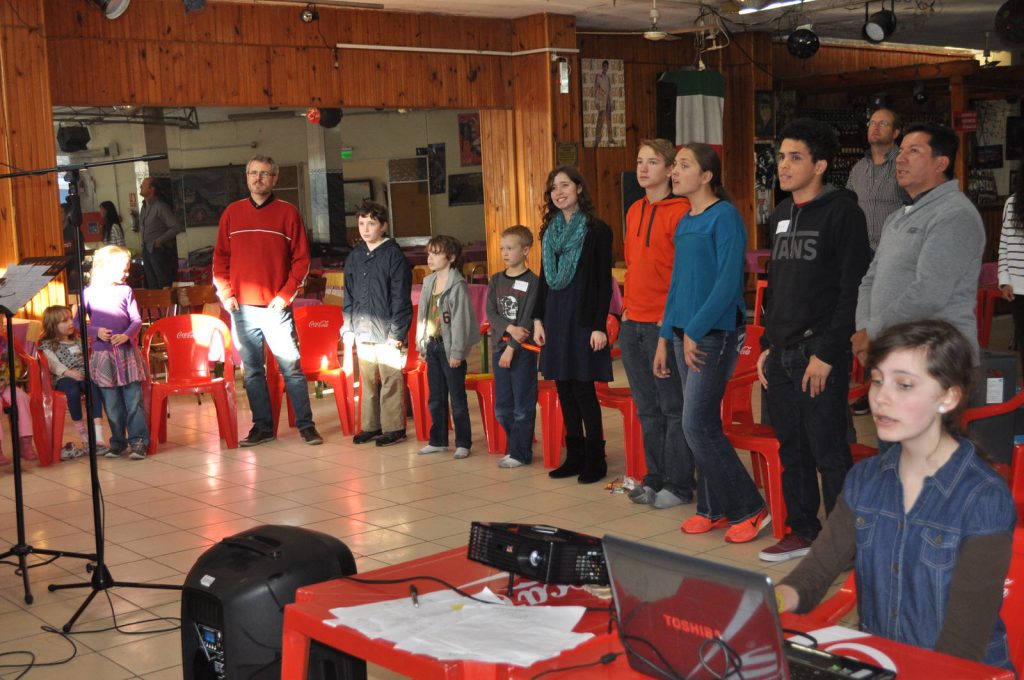 (Excerpt from Prayer Letter) We had a short term team come out from Kansas to help us with the VBS. While we didn't have children from the community come, we had several gospel opportunities. We had one adult call with interest in attending our church, probably hearing about us from the fliers we blanketed the community with. He said he would come to church today - please pray for him. Another young man from our English class came to help translate and has expressed interest in attending a Bible study. And then another young man, who was running the jump house, participated in the VBS and wanted to learn more about salvation. The team that came out did a wonderful job planning and running the VBS, and was a great help and encouragement to us. There was some opposition though, as one angry father called complaining that we had passed out flyers in front of a public school (we passed out flyers in front of about 5 schools as they were letting out the day before the VBS started). It is not illegal as long as we are not on school property, but there is a strong sentiment of separation of church and state here. 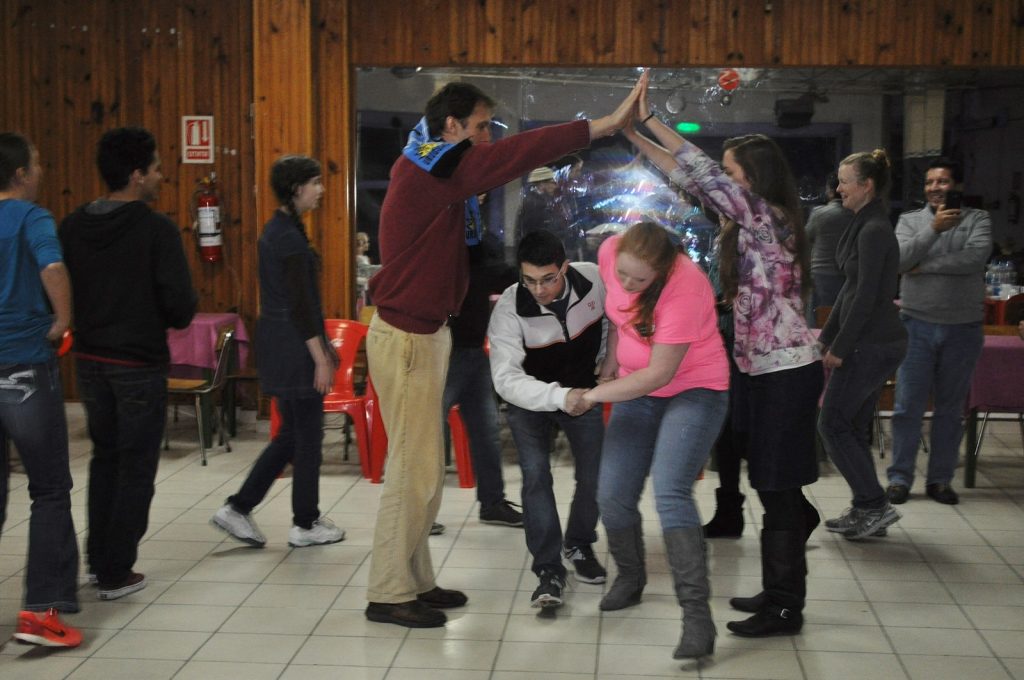 Diego (black and white jacket) from Markus' Conversational English class, joined the group after VBS for some "English Country Dancing" 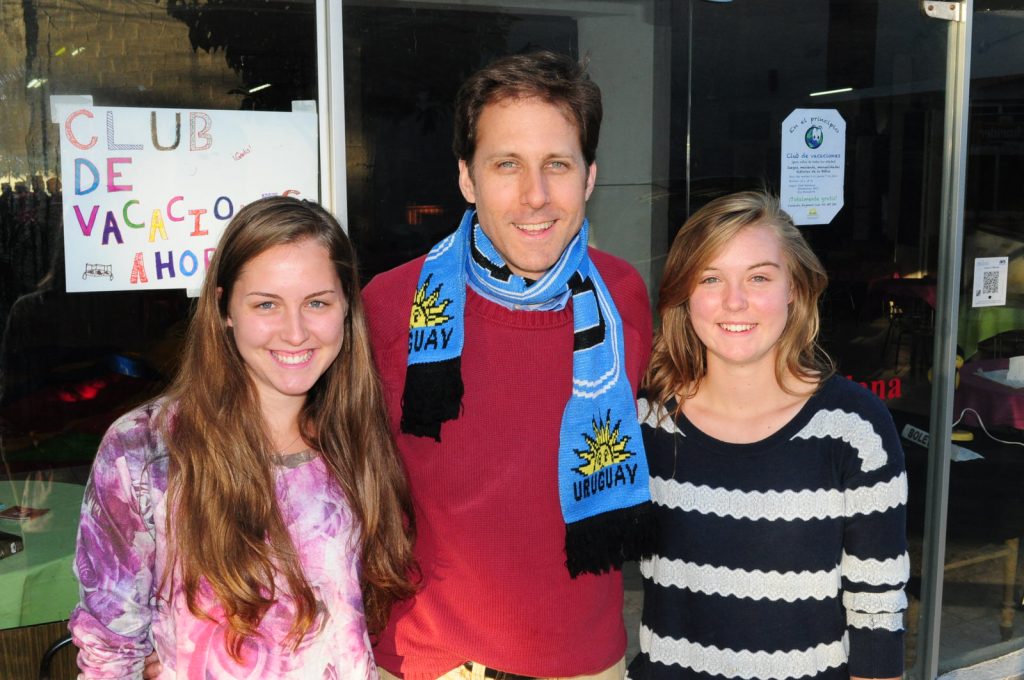 Team Leader from Kansas with his daughters

Yesterday Ray and Markus had the privilege of doing questionnaire evangelism in the park with Jairo and Juan Carlos - two men who came to Uruguay this week as part of the short term team. They are both fluent in Spanish and passionate for serving the Lord. They were an invaluable help as we interacted with Uruguayans in Spanish. Several of the people we spoke with are skeptical of the Church, perceive that the Church wants their money, and are either atheist or agnostic. There is an entrenched opposition to God as He is revealed in the Bible. Please pray that God will bring many in Uruguay to faith in the Lord Jesus.