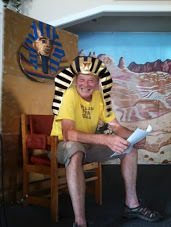 This was the key verse for our week of English immersion camp June 29th – July 6th, 2013.  Our theme was “Camping” and our Bible studies covered the deliverance of the Hebrews from the slavery of Pharaoh.   [Believe it or not, there is a link: the people were CAMPING in the wilderness after God delivered them, and Moses was CAMPING in the wilderness after he ran away from Egypt the first time!]  We had a great time, and the Lord did care for us all!

This year marks the fifth year of "English for Kids" in Saint-Georges de Beauce, located south of Quebec City in Canada.  Here are some statistics:

Especially ambitious was our Friday finale drama, complete with costumes for Moses, Pharoah, Egyptian soldiers, frogs (of the frog plague), Hebrews, and a complete parting and closing of the Red Sea!  It was a triumph of L.B.S. (low budget stagecraft).  In one week we had a bilingual, 42 person children’s theatre, and it was no cake walk, especially in the heat!  I’m so thankful for the hours put into revising the script, rehearsing, and coaching the kids.  Compared to all previous finales, it was an amazing improvement and success!

We are so thankful for returning campers year after year – some back for their fifth year.  In our teen track the campers take a strict pledge to “speak only English until 4 p.m.” each day.  These teens have in depth Bible studies, run the camp store and the bank, take the lead in the program drama, and film some “videos” on the camp’s DVR.  They were able to fully understand the story of the Passover and how the Lord spared the Hebrews because of the blood on the door – a wonderful Gospel message.

We are thankful for good interactions with the parents this year.  Those who want to practice their English often hang around during the day to observe.

I’m also thankful for Christian teens showing strong ability to learn, adapt, and serve in their first tough leadership experiences. Planning, teaching and managing a classroom of kids is an adult tasks, and the learning curve is very steep as these teens adapt to the challenge day by day.  I’m also so full of admiration for the local teens who work tirelessly as translators and music leaders in their second language – it’s an exhausting task, and their English is getting really good!  We couldn’t do it without them.   I think getting the USA and Canadian teens together is a big boost spiritually for each side of the equation.

I’m so thankful for the chance to direct the "English for Kids" in Saint-Georges de Beauce. It’s one of the highlights of the year for me.

Thanks to all for your prayers and contributions!  Please ask the Lord for “water from the rock” for the families of the children as the local congregation faithfully contacts each family during the coming months.