Teaching the Catechism in Creole

Teaching the Catechism in Creole

Late summer means many people are traveling to visit relatives in different parts of Haiti. We have had a few less kids than usual at Vacation Bible School, but still a good, enthusiastic group. The team has worked hard even after their two long days of travel to arrive on Lagonav. The last two days has meant a total of 8 hours in the backup of the truck.

The kids are very serious about their catechis 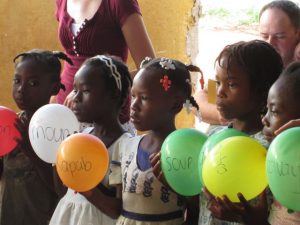 m learning.  The picture at right shows some of the girls at Plenn Mapou holding up balloons with the words to the Children's Catechism answer.  They learned the response and to help had the words on balloons with them being systematically popped.  The volunteers had fun stomping on the balloons to break them.  We are very thankful at both the catechism learning and the biblical material behind it that these young children are being exposed to. 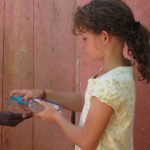 The Hopp kids also like to tag along and participate where they can in the VBS programs.  They usually help the team where they can and enjoy singing the Haitian Creole songs.  One of the children can be seen at snack time dispensing hand sanitizer to the children before they collect their bread with peanut butter and water.  Since the cholera epidemic first took hold in Haiti this has been a regular part of the experience.  All three older kids spent one of the days with the team at Plenn Mapou.  The ride was a long one but they enjoyed talking with the team members in the backseat of the Mule and saying, "Bonswa" to those we passed along the road.

Thanks for praying for the team.  The weather has been great, they have worked hard and we look forward to the eternal spiritual fruit that the Holy Spirit is growing in us and the kids of Lagonav.  We know the sacrifice of the churches and other supporters is not in vain as the teams come alongside us to further the work of the church and the preaching of the gospel.